Astronomical Polarimetry 2020 (Astropol 2020) is the next in a series of international conferences. The aim of this series of conferences is to bring researchers interested in astronomical polarimetry together to share and discuss recent results and advances in technical and scientific aspects in all relevant astronomical fields.

It has been more than 60 years since Hall and Hiltner reported that the light from reddened stars is generally polarized. Around the same time, Davis and Greenstein presented a model to interpret the phenomena owing to aligned dust grains in the interstellar medium.

Since then, the global astronomical polarimetry community has grown tremendously. These cutting-edgetechniques are applied to answer major questions in astronomy, from small scales such as dust particles in proto-planetary systems up to large scales involving the origin and the fate of the Universe. Theories and models to interpret the observations have similarly evolved in scope and sophistication.

The first ‘Astropol’ conference was held in Tucson, AZ, in1972. After that, meetings were held in 1995 in Troy, New York, USA and in 2004 in Waikoloa, Hawaii. In the 2008 meeting in La Malbaie, Quebec, Canada, sciences cases from small to large telescopes were discussed, and the 2014 meeting in Grenoble, France covered wider fields of astronomical polarimetry, including laboratory experiments, solar system, exoplanets, stellar magnetic fields, interstellar medium, galaxies, Gamma-ray bursts and the Cosmic Microwave Background. This latest Astropol meeting attracted around 150 of participants.

Since 2014, a number of sophisticated instruments and datasets have become available to the community. ALMA was inaugurated in and started polarization observations in 2014. Adaptive optics aided 8-m class telescopes, such as Subaru, VLT and Gemini have been providing high-contrast spectropolarimetry. There is also the Robert Stobie Spectrograph (RSS) spectropolarimeter on the 11-m SALT telescope and the mid-infrared CanariCam polarimeter on the Gran Telescopio Canarias (GTC), that may become available to public in the future. Data release of the all-sky radio and submillimeter polarization mapping by the Planck satellite has had a strong impact in many astronomical fields. The SOFIA/HAWC+ FIR polarimeter is available to the community. In addition, Astrosat and Hitomi and balloon experiments have offered us new insights into the polarized sky in X-rays and Gamma-rays.

ASTROPOL 2020 will demonstrate that a new era of polarimetry has come to the astronomical community. 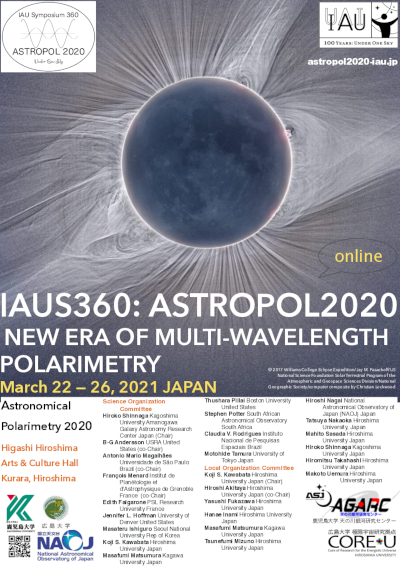